Welcome to DAV Bingo!
This brief guide can help you become more familiar with bingo.

Bingo is a game of chance, where each player crosses off or “daubs,” their number cards until player(s) have achieved the declared pattern.

When you play bingo tonight, you will have the choice of playing on paper, playing electronically with a machine, or a combination of both.

In order to participate a player must purchase a Regular Packet Game, which usually has 6 cards per game. Each player-card consists of 24 unique numbers and a free space in the center of the 5×5 card.

The packet prices vary from $2 – $5 based on the payout amount.

We have a 2 packet minimum to play in hall.

The Numbers in column; 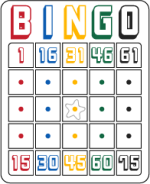 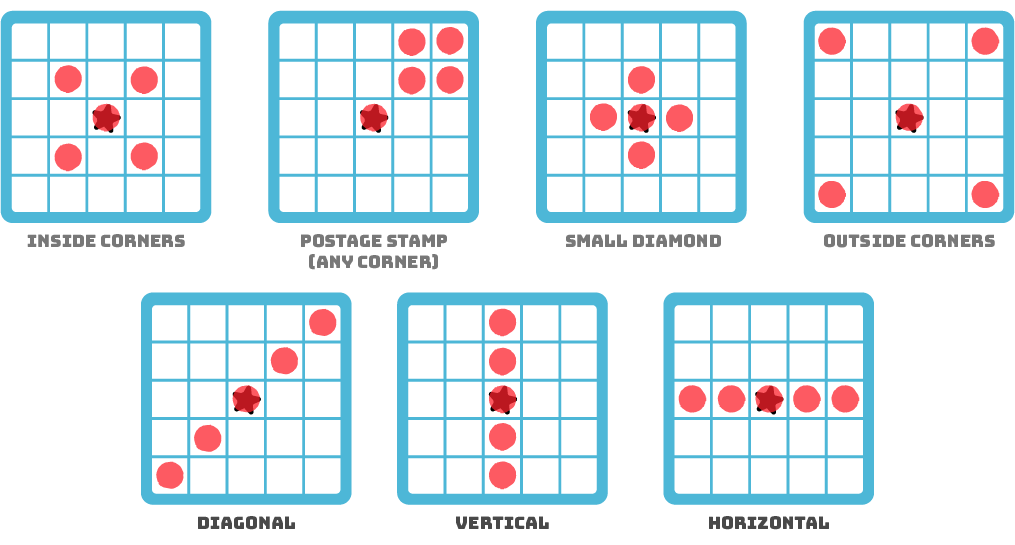 The following is a brief explanation of common bingo terms.

BLACKOUT: A game in which all the numbers on the card must have been called and marked in order to win the blackout. Blackouts usually pay a substantial amount more than a packet game.  These games are almost always played on throw-aways and usually have one or more work-ups.

BONANZA: Individual cards that are sealed and sold individually.  Bonanza games usually have a set number of balls pulled prior to the session.  Customers can mark off the pre-called numbers and then decide if they want to keep that card or trade for another sealed card for half the original price.

BONUS LINE (packet): The three numbers at the top of each Mark Packet.  If all three bonus line numbers are called, the customer with that packet wins.  The bonus line prize varies based on the number of balls called and is sometimes closed after 7 numbers.

BUY-IN: A term used for when you have purchased your packets/machine/tokens at the beginning.  Most regular bingo sessions have a minimum buy-in requirement.

CALLER’S SPECIAL: In T-Up, a pattern game played during the set, called at regular (fast) T-Up speed.  Caller’s specials always cost $0.50 each and are announced directly prior to the start of the special.

CASH-OUT: When a customer redeems their playing tokens for cash while playing T-Up.

DAUBER: A plastic bottle filled with ink used to mark off numbers called on the bingo packets.

DINO BALL: OSRA’s free progressive pot game.  The Dino Ball is the second number out on Early Bird 3 and any single winner with a straight line bingo on the Dino number wins the Dino pot (up to $1,000).  The Dino Ball goes up $25 every session it isn’t won.

DOUBLE-UP: In T-Up, a 2 token ($1.00) a sheet blackout game.  Double-Ups are called at 3 seconds per number. Some double-ups have patterns on the way up to the full card blackout and some do not.  Callers announce the details directly prior to the game starting.

EARLY BIRDS: The games played after Warm-Ups and before the packet games begin.  Early Birds are sold individually as throw-aways and are almost always pattern games.

HANDLE: The amount of bingo sales for a particular game.  In T-Up, the payout for most games are set at 70% of the handle.

HARDWAY BINGO: A hardway bingo is a straight-line bingo without use of the free spot.

HOUSE RULES: A set of rules that vary from bingo hall to bingo hall. The house rules are posted on the wall and are included in new player packets.

LAST CALL: The customer’s last chance to buy throw-aways for an upcoming special game.  Last call is announced by the caller and workers will only go to customers with raised hands during last call.

LINKED GAME|PROGRESSIVE:  A jackpot that each sponsor pays into and grows after each session.  The current jackpot amount is posted in the hall and it can be purchased at buy-in for the chance to win the jackpot.  The current jackpot game at DAV maxes out at $2,500. Once the jackpot reaches its limit, a new jackpot is created and continues to grow until the someone wins.

MACHINES: Bingo playing computers that can be rented at the buy-in counter.  Customers can load up to 50 of each throw-away and 50 of each packet game into their computers.  Players punch in the bingo ball number as it is called and the computer automatically marks each card loaded in the machine.  Each session has a minimum amount of games that must be purchased in order to rent a machine. A detailed description of how to use the machines can be provided to any player.

MARK(packet): The top level packet.  They pay more than the regular packets and are purchased for more than a regular packet. Also called Bonus Packs, they feature larger, easier to read numbers and also have a bonus line on the top right of each game.

MONITOR: The tv that the bingo balls are shown in when they are pulled from the blower.  The number is always shown on the monitor before it is verbally announced.  A player does not have a bingo until the number is called out loud. There are a number of monitors throughout the bingo hall.

ON:  A common word used among players when they are one number away from winning

PACKET: The combined set of papers you purchase when you buy-in.  Packets consist of 6 cards per sheet, with 15 sheets (one for each pattern game) per packet.  Additional cards (throw-aways) may be purchased from the floor prior to each game. All customers playing any given session must purchase two packets, either on paper or loaded in a machine, to be allowed to play the special games.

Each packet has 15 sheets (one for each game) in it and each sheet contains 6 bingo cards.  The packet games are played through out the session.

PATTERN GAME: A game that differs from one of the 7 ways to win (posted on the wall and in the new player packet). A pattern game can take the form of any shape that can be played using one of the squares on your papers. (i.e, a kite, spaceship, the number 7, the letter X , etc.)

PRE-SALE: A chance to buy all of the throw-aways before they are sold on the floor.  Pre-Sale starts at the same time buy-ins begin and ends during early bird games.

PROGRESSIVE:  A game where the jackpot grows each session that no one wins.  May also be a Linked Game, see above.

REGULAR (packet): Packets that pay the regular payout for the game won and purchased at a lower amount than a Mark packet.

REGULAR TABLE: In T-Up, the most commonly played games.  Winners will have one of the following patterns: 4 outside corners, any straight line, or a block of 4 anywhere on your card.

SIZZLE BALL: An extra ball in machine during the OASF’s T-Up sessions.  If you’re a single winner and get a hardway bingo on the number directly after the sizzle ball, you win the OASF’s progressive pot.

SPEEDO: A paper-only game played in afternoon and evening sessions.  Speedo is a full-card blackout played on a single card throw-away and is called at 2 – 3 seconds per number.

SPONSOR: The non profit group that is running any given session. It varies from session to session.

T-UP: A faster version of bingo, also known as Speed Bingo or Daubers-Up Bingo.  Numbers are called approximately one per second and cards are bought at the beginning of every game versus buying a packet that has several sheets in it and is played for the whole session. Players buy tokens at the beginning of the night and use tokens to purchase playing papers prior to each game.  Additional tokens may be purchased or tokens redeemed for cash at any point of the session.  Payouts for T-Up games are not determined in advance of the game being played.  Most games are paid on a 70/30 split, with the winner(s) taking 70% of the tokens played, though some games have a set prize amount and others are winner-take-all.

THROW AWAY: A throw away is usually 1 sheet of paper and when the game is over you throw it away versus a packet game that you keep playing on until all the sheets are gone

TRIPLE-UP: In T-Up, a 3 token ($1.50) a sheet blackout game.  Triple-Up blackouts are usually played once or twice per night and because they cost more, they also pay more.  Triple-Ups are called at 4 seconds per number and usually have a work-up.

VERIFICATION: When the floor worker calls back the numbers to the caller from a winning paper and it is showed on the monitor to be a valid bingo.

WORK UP: A work up is the pattern game/games played on the same paper as your blackout prior to the actual blackout

3 second game: In T-Up, these games cost $0.50 per sheet and are any of the 7 ways to win.  Callers announce the game and payout one game prior to the 3-second game starting.

DAV Bingo offers multiple Progressive Jackpots, test your luck!
Prizes can reach up to $2,500 per jackpot & the more progressives that remain unclaimed
the easier it becomes to win the earlier Jackpots.

To enter for a chance to win, please let our bingo staff know that you'd like to enter during buy-ins.

Each Jackpot will have a designated pattern or winning instruction, please make sure to confirm the pattern on our
homepage or speak to one of our bingo staffs.

DAV BINGO RESERVES THE RIGHT TO REFUSE SERVICE TO ANYONE

How much does it cost to play?

How is Machine Bingo played?

Machines are available, which will have cards loaded, and you will mark all of the cards simply by punching in the number as it is called.

You can put up to ?? cards into a machine for each regular game as well as cards for blackouts and other special games.

Each player is allowed to play only one machine.

Minimum buy-in for a machine is $40

What prizes will I win?

We offer exceptional cash winnings and prizes. You can crack a lot more potential winnings by including a Jackpot Ball during your Regular Packet purchase.

We have multiple progressive jackpot pools that pay up to $2,500!

When do I have to be at the hall?

BUY-INs starts 30 minutes prior to the session.

We advise out players to arrive earlier before the sessions start, in order to, BUY-IN and get seated for the games.

I've won! How do I claim my prize?

For any winnings above $1,200 our staff will require a social security card as well.

If you didn't have either required documents, we will provide a 30 day window for winners to claim their prize.

Yes! We offer disabled parking spaces and easy-to-access entrance. We can also lend wheelchairs for any player with the needs.

What are other things that DAV Bingo offers?

We have a lottery machine room, a full-kitchen snack bar & ticket games that lead to various prizes!